What Readers are saying about 'Pacific Tsunami Galu Afi'

I just had to write and let you know that I'm so grateful that the documentation of a sad and tragic time in the history of our people was assigned to you. You're a gifted and brilliant writer. 'Pacific Tsunami' is a remarkable feat given you had only a short time (one year?) to complete it. I absolutely love your writing. 'Galu Afi' should be on everyone's reading list. Congratulations on a great achievement. I look forward to reading more of your work.
Daniel Pouesi, California, USA

"I congratulate you on such a detailed and faith-filled masterpiece of historical documentation. You can be sure that this book will be part of the history of American Samoa."
Most Rev. J. Quinn Weitzel, Bishop of Samoa - Pago Pago.
Posted by Lani Wendt Young at 4:10 PM No comments: 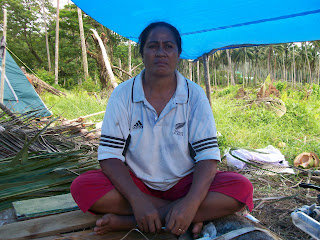 Tuluiga Utaulu of Lepa village is a weaver of fine mats. She is the mother of six children. Her husband works in Apia so they only see him on the weekends. Tuluiga’s oldest daughter Lele was working at Seabreeze Resort up the road at Aufaga village. Before the tsunami came.

On that morning, Tuluiga was going to the Vaigalu pool with the other women of her village for the ceremony that marked the completion of fine mats. The earth shook, startling them all as several large rocks dislodged from the hillside and rolled to the road in little rushes of dirt. There was a quiet stillness after the earthquake, moments where Tuluiga could feel the panicked pounding of her heart gradually settle again to its regular rhythm. Then the group started an excited hum of conversation as they discussed the shake, still walking to the pool with rolls of soft brown matting in their arms. It wasn’t long before the women noticed the difference in the ocean. One of the women exclaimed, Eh, look at the tide, it’s gone right out!


The women stopped and stared, puzzled but not afraid. Not yet. Then the ocean began to run back towards them, swift and seething. It grew as it ran, as if a creature unfurling from a prone position. The women barely had time to register, to process what they were seeing, to inhale enough air so they could scream, so they could turn and run. They scrambled for the hill, the stronger healthier ones like Tuluiga helping the older women along. Because the road was right there, safety was within close reach. They made it to the church and stood there in a frightened huddle, watching as the sea swept in to their village. But Tuluiga could not stay there. Because down below in their little house she had left her teenage daughter home alone. Quickly she rushed to one of the shortcuts that curved below the church hall and made her way back down to the shore, halting abruptly when her path was blocked by the raging sea. All the houses below were completely covered, only trees jutted from the brown water that was cluttered thick with debris. And clinging to the branches of one of those trees, was Tuluiga’s daughter.

“She was caught in the branches of the breadfruit tree, I saw her there, trying to climb up onto the hill and crawl. I was so shocked and afraid. I slipped and fell down half into the water, it was like I had passed out. I think it was the pain in my knees when I fell that shocked me up again. I stood up and crossed the water, swimming through all the things that were in the water, like corrugated iron and wood. I got my daughter and helped her back to the path.”

Tuluiga took her daughter back up the hill. They waited there for the water to go down. They were watching when the fire service vehicles came and tried to make their way through their broken road. “The first help we saw after the tsunami was the fire truck…they cleared the road to get through and then an EPC truck came following behind it, those were the first ones on the scene.”

The Utaulu family has moved far inland, up in the hills behind the original Lepa village. A road has been roughly cut into the bush so the relocated families can access their new settlement but the houses built with tsunami aid will be slow to reach them. The disadvantage of belonging to the same village as the Prime Minister who is placing the needs of other worst hit areas above those of his own. As Tuluiga explains, “They came and started digging the foundations for our new house but then they stopped work…they explained to us that they were taking the machines to give assistance to Saleapaga village first because the Prime Minister said to give the assistance to our village last.” It’s the same with the power lines. “They are just starting on our power supply because all the rest of Aleipata is completed and now it is our turn.” Those who complain about ‘favouritism’ for the PM’s constituency have obviously not been regular visitors to the disaster zone. For now, Tuluiga cooks over an open fire shielded from the highland winds by pieces of corrugated iron salvaged from the zone. Her daughters are clearing the tangled grass and weaving coconut leaf blinds for their ramshackle hut. Lele hopes that the Seabreeze Resort will reopen soon and that she can get her old job back. Tuluiga’s other daughter, the one she pulled from the tsunami is still not quite right. “We keep taking her for checkups because now her hearing is not good like it used to be. They told us at the hospital to try and keep her out of the sun.”

The afternoon sun blazes defiantly on the Utaulu’s clearing as we drive away.
Posted by Lani Wendt Young at 5:34 PM No comments: