A Review by Nadine Millar

A harrowing read, as you'd expect, but beautifully and sensitively put together by the author Lani Wendt Young. This is a meticulously researched book published only a year after the Tsunami - in other words, while the memories of the day were still raw for the survivors. It's hard to ascertain how many people were interviewed for this book but it seems like hundreds - from those who were directly in the path of the Galu Afi - Wave of Fire to those who were a part of the rescue and recovery effort. Sources include first-hand interviews with survivors and emergency and aid workers, as well as material from television and print media, journals, government reports, and seismic, meteorological and geological data.

The book is organised chronologically - an historical foundation is laid first (i.e. what experience the Samoan people had had of Tsunami prior to 2009 and therefore how prepared they were), followed by "The Earthquake", "Evacuation", "The Wave", through to "First Response", "How will we cope", "The Hospital", and so on until the closing chapters of "We Remember the Dead" and "After. Thoughts". In total there are 25 chapters, each one made up of different voices telling their individual stories.

I wouldn't have envied Wendt Young's task - she had to weigh up one story against another against another. It might have been tempting to devote whole pages to one family's tale - even, arguably, disrespectful not to - but Wendt Young doesn't allow the reader to dwell too long in one story. Or when the going gets tough she'll leave a family in peace, as if allowing them the privacy to grieve, coming back to their story in a few pages time. The desire for this book to be something other than the the literary equivalent of a bad car accident depicted in morbid detail for the benefit of nosy, insensitive onlookers is clearly evident. Likewise, Wendt Young manages to tell the most heart breaking of stories without succumbing to pity - if that makes sense. She just tells the story - or, more accurately, allows the stories to be told as they are, without layers and layers of thick, overbearing emotive language. You'll still cry though. Here, for example, Sili recalls how, trapped by debris with his 4 year old nephew in his arms, he had no choice but to let him go.

"When I looked up the water was about two meters above me and I didn't know what to do with my nephew. When I thought he may have a chance, I just released him, I pushed him up towards the light".

Sili's nephew never made it.

If you've ever been to Samoa, ever stayed at Lalomanu, this book will have an even greater impact on you. You know that stretch of beach, you woke up to all that white sand and the turquoise water peaking through the drop-blinds of the fale. As you read this book, you can picture yourself being there. For me, having lived in Samoa for four years and recognising a number of people whose stories are told in these pages, including Sili & Tai's, it's not an easy trip to take at all. If you're Samoan, on the other hand, I could actually imagine this book being impossibly tough to read. You would know so many of these families if not personally, then in some way or another - the community is that small.

The upshot of all this, is that you should beg, borrow or steal yourself a copy of this book however you can. That may be easier said than done however - my edition was published with funding from Ausaid... and it's registering unavailable on Fishpond or Amazon. Thanks to Marion for sending me this copy, always could count on you! Good luck tracking it down folks, and if any commercial publishers are reading this here's a piece of gold for you!

You can find the original review posted on Goodreads, here: Goodreads.

Posted by Lani Wendt Young at 1:13 AM No comments: 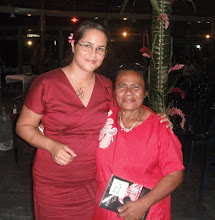